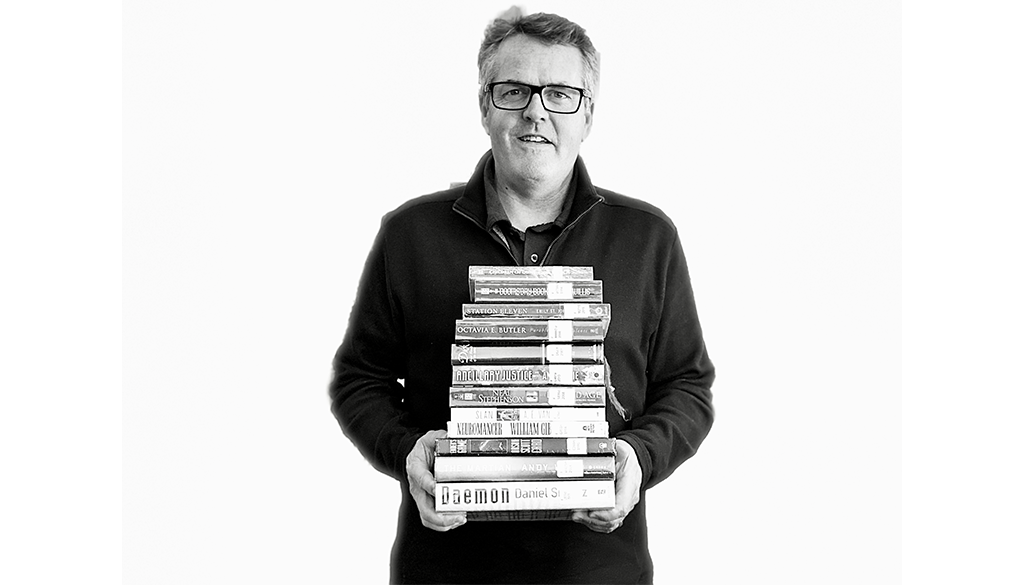 When I think about fantasy, I think of swords, magic, and dragons. The most popular fantasy has been J.R.R. Tolkien’s Lord of the Rings and, more recently, George R.R. Martin’s Game of Thrones.

When we turn to science fiction, we are talking about speculative fiction that usually deals with futuristic ideas around science and technology, space exploration, parallel universes, etc. Even within the science fiction realm, we may see “hard” sci-fi or “military” sci-fi or “space opera” sci-fi. To name a few. Stories could take place in the near present day or hundreds of year into the future.

Our library collection includes approximately 400 science fiction titles. We have much to choose from across generations of writers. We have classic sci-fi and more modern commercially successful science fiction. In some cases, the books could cross over to literary fiction and yet maintain their categorization of science fiction.

Here’s a few titles for you to consider as a starting point.

Enders Game by Orson Scott Card is a riveting tale. It is a book that I’ve read more than once, and will probably read again. It’s very engaging and touches on questions of morality and ethics. Some of you may have read this book as part of an English class. From the book jacket, “Andrew "Ender" Wiggin thinks he is playing computer simulated war games; he is, in fact, engaged in something far more desperate. The result of genetic experimentation, Ender may be the military genius Earth desperately needs in a war against an alien enemy seeking to destroy all human life. The only way to find out is to throw Ender into ever harsher training, to chip away and find the diamond inside, or destroy him utterly. Ender Wiggin is six years old when it begins. He will grow up fast.” STRONGLY RECOMMENDED

William Gibson has written dozens of books and is considered the father by cyberpunk literature. His 1982 book Neuromancer from kicks us off. The winner of the Hugo, Nebula, and Philip K. Dick Awards, Neuromancer was the first fully-realized glimpse of humankind’s digital future. From the book jacket, “Henry Dorsett Case was the sharpest data-thief in the business, until vengeful former employees crippled his nervous system. But now a new and very mysterious employer recruits him for a last-chance run. The target: an unthinkably powerful artificial intelligence orbiting Earth in service of the sinister Tessier-Ashpool business clan. With a dead man riding shotgun and Molly, mirror-eyed street-samurai, to watch his back, Case embarks on an adventure that ups the ante on an entire genre of fiction.”

Another author with dozens of successful books is Neal Stephenson. In 1995 he wrote the book The Diamond Age, Or, A Young Lady’s Illustrated Primer. The novel deals with themes of education, social class, ethnicity, and the nature of artificial intelligence. I rank this in one of my top science fiction books. It’s a book that I can recommend to non-sci-fi readers due to the storytelling and the big issues it deals with. From the book jacket, “Set in twenty-first-century Shanghai, it is the story of what happens when a state-of-the-art interactive device falls into the hands of a street urchin named Nell. Her life – and the entire future of humanity – is about to be decoded and reprogrammed.” STRONGLY RECOMMENDED

One of the few black science fiction writers is Octavia Butler. In this second novel in the Earthseed trilogy (only two were completed) we continue the story of Lauren Olamina. Parable of the Talents takes place in the socially and economically depressed California in the 2030s. According to the book jacket, Lauren is “convinced that her community should colonize the stars, Lauren and her followers make preparations. But the collapse of society and rise of fanatics result in Lauren's followers being enslaved, and her daughter stolen from her. Now, Lauren must fight back to save the new world order.” It is centered around her religion known as Earthseed.

“The Dune saga, set in the distant future, and taking place over millennia, explores complex themes, such as the long-term survival of the human species, human evolution, planetary science and ecology, and the intersection of religion, politics, economics and power in a future where humanity has long since developed interstellar travel and settled many thousands of worlds.” (Wikipedia) We have most of the books in the library, but here we focus on Children of Dune by Frank Herbert. It is the third book in the saga. The Children of Dune are twin siblings Leto and Ghanima Atreides, whose father, the Emperor Paul Muad'Dib, disappeared in the desert wastelands of Arrakis nine years ago. Like their father, the twins possess supernormal abilities--making them valuable to their manipulative aunt Alia, who rules the Empire in the name of House Atreides. Any of the books are worth reading.

Another crossover to literary fiction is Emily St. John Mandel’s Station Eleven. This was a surprise favorite for me. Set in the days of civilization's collapse, Station Eleven tells the story of a Hollywood star, his would-be savior, and a nomadic group of actors roaming the scattered outposts of the Great Lakes region, risking everything for art and humanity. Through several twists of fate, the five character stories become connected. It is dystopian fiction set in the near future when America has fallen apart. STRONGLY RECOMMENDED

How many versions of the movie Blade Runner exist? Maybe five or six? Well, each of those were based on a short story by Philip K. Dick called Do Androids Dream of Electric Sheep? This is a story you can read in a few hours. And if you like the work of Dick, then there are dozens of more short stories available. Many of which became movies of different names. From the jacket, “San Francisco lies under a cloud of radioactive dust. The World War has killed millions, driving entire species to extinction and sending mankind off-planet. Those who remained coveted any living creature, and for people who couldn’t afford one, companies built incredibly realistic fakes: horses, birds, cats, sheep . . . even humans. Rick Deckard is an officially sanctioned bounty hunter tasked to find six rogue androids—they’re machines, but look, sound, and think like humans—clever, and most of all, dangerous humans.”

Ancillary Justice was the debut novel by Ann Leckie. Released in 2013, and winner of the Hugo, Nebula, Philip K. Dick, and Locus awards. She went on to release Ancillary Sword (2014) and Ancillary Mercy (2016). One of the most striking aspects of the novel is the lack of gender pronouns used in the Radch empire. Here’s some from the book jacket, “On a remote, icy planet, the soldier known as Breq is drawing closer to completing her quest. Once, she was the Justice of Toren - a colossal starship with an artificial intelligence linking thousands of soldiers in the service of the Radch, the empire that conquered the galaxy. Now, an act of treachery has ripped it all away, leaving her with one fragile human body, unanswered questions, and a burning desire for vengeance.” STRONGLY RECOMMENDED

To close out our exploration, here’s a few more titles to consider.

I’ve read all these books, so stop by and chat with me if you have an interest in science fiction books.